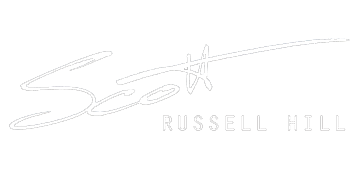 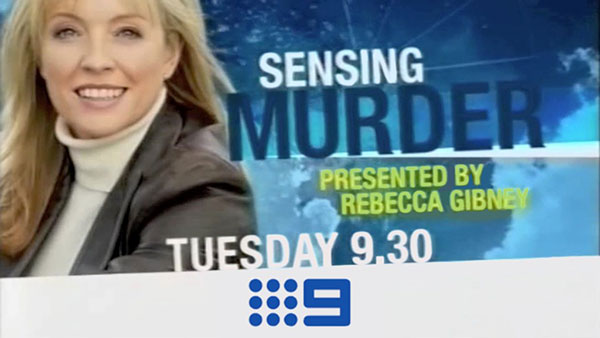 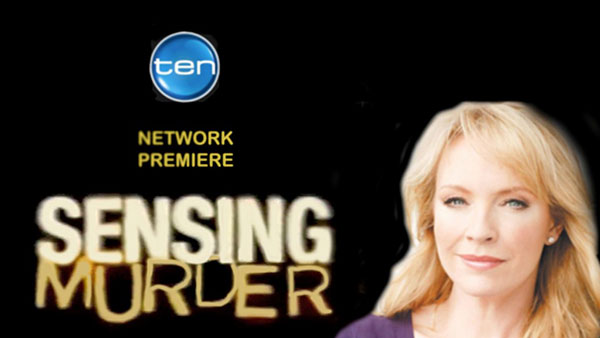 The first book is his 2006 release PSYCHIC DETECTIVE which takes the reader behind the scenes on Scott’s journey through the entire series of SENSING MURDER.

Purchase on the Books page. 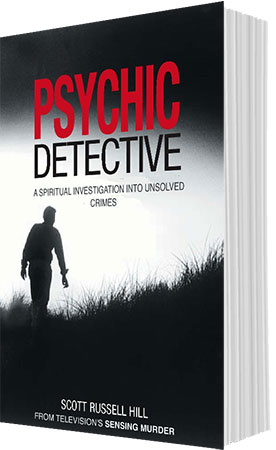 This is the original cover of the book. 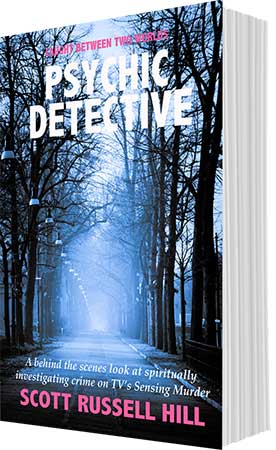 This is the cover since the books 2012 re-release.

The 2nd book is SENSING NATASHA, specifically about the filming of the Lost Soul episode at New Zealand’s MacLaren Falls when Natasha Hayden’s spirit jumped in an interrupted filming.

Purchase on the Books page. 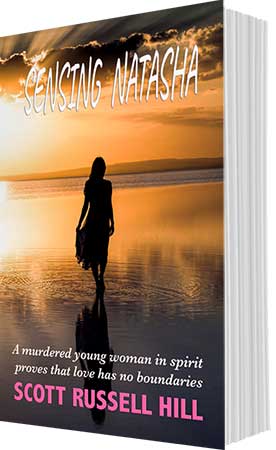 Scott’s first Sensing Murder episode saw him lead the film crew to the Fawkner Cemetery north of Melbourne as he followed the energy of a young woman on the other side. Once at the cemetery, Scott accurately described the passing of 25-year-old Mersina Halvagis who was murdered there on a Saturday afternoon in November 1997. Scott told the crew that the attacker was known to Police, that he was in jail, and that his first name was Peter. Three years after the episode was filmed, serial killer Peter Dupas was found guilty of Mersina’s murder.

Sensing Murder Producers were so keen to feature Mersina in the series, they filmed the episode first and then sought her family’s approval to air it. Mersina’s family did not give their approval, and the episode has never aired. 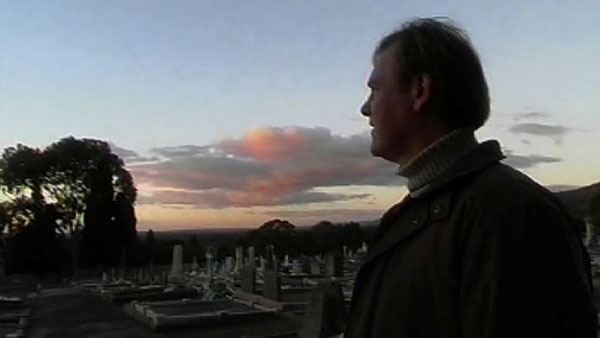 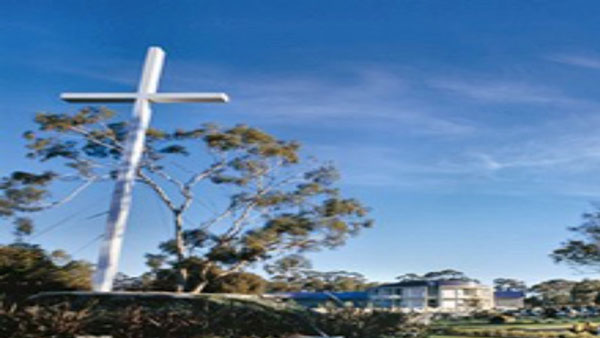 In one of Sensing Murder’s most remembered episodes, Scott led the film crew 53 kilometres south of Melbourne to Kananook train station. In July 1990, 23-year-old  Sarah McDiarmid caught a night train home with some workmates.

It was here in July 1990 that 23-year-old  Sarah McDiarmid caught a night train home with some workmates. The friends travelled with her as far as Bonbeach where they got off, leaving Sarah to go on to Kananook. Sarah got off the train at Kananook and was never seen again.

Scott accurately used the name Sarah, described what had happened to her, the make of car the offenders were driving, and revealed two names that a Private Investigator discovered were known to police but had never been made public. Scott also helped a forensic artist draw an identikit picture of the main person who attacked Sarah. Scott also felt that Sarah had been taken to the Frankston Dump. He also drew a map and accurately described the only section of the dump that was open to the public in 1990 when Sarah disappeared.

Australian Police will not investigate the opinions of psychics, so nothing happened with their follow-up to this or any of the Australian Sensing Murder episodes. 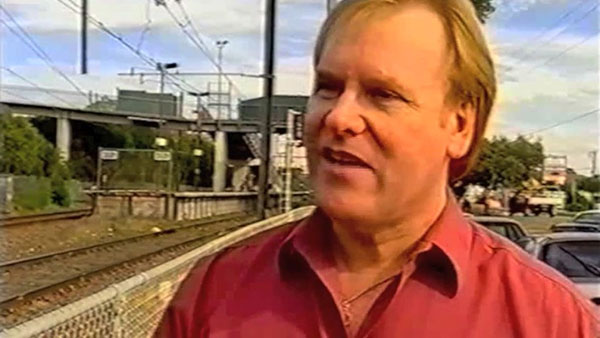 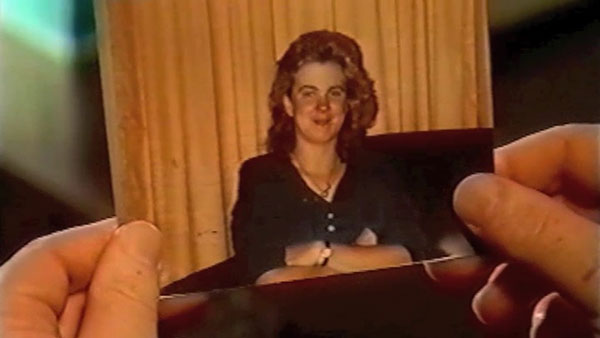 Scott led the film crew to the Melbourne seaside suburb of Beaumaris, and he walked straight up to the house of 8-year-old Louise Worledge who was abducted from her bedroom in 1976. It was a classic example of where spiritual energy overlapped and Scott followed the stronger enegery of Louise, even though a “Chinese girl” (as Scott described her) was “standing behind” Louise.

The “Chinese girl” was actually the subject of this Sensing Murder case, and Scott then led the film crew north east of Melbourne to the suburb of Templestowe where 13-year-old Karmein Chan had been abducted from her home in 1991.

Scott’s Psychic Detective clues on this case were different to what the Producers, Private Investigator and other Psychic (who also filmed the case) felt were the strongest leads. And so Scott’s part was cut from the episode and he was replaced by a “mystery psychic”. 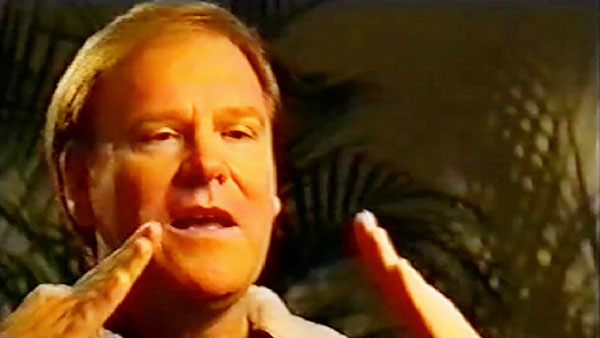 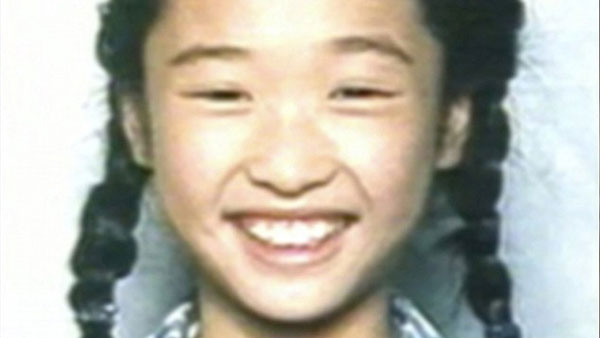 Scott wasn’t originally scheduled to be a part of this episode. The two psychics working on the case had come up with a few clues, but not enough. With broadcast deadlines looming, and time running out to complete the episode, Sensing Murder Producers decided to break the format and hand Scott the Case Notes and Coroner’s Report so that he might be able to more quickly come up with a psychic determination.

Usually, the psychics on Sensing Murder are told nothing about the case they’re working on, and this break in format was mentioned in the episode so that viewers knew what was going on. To save time, Scott was driven directly to Phillip Island south of Melbourne where the two murders being investigated took place, rather than have him lead the film crew as he usually would.

This was also one of the episodes where Scott’s numerical profiling came into play, and based on the date of birth of one of the victim’s, he determined that the time of death of Philip Island resident Beth Barnard was incorrect in the Coroner’s Report. Scott ascertained it actually happened six hours earlier, which would completely change various aspects of the case. A Private Investigator then found evidence that backed up Scott’s claim. 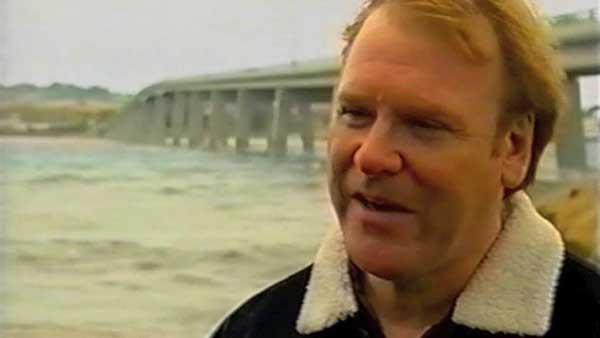 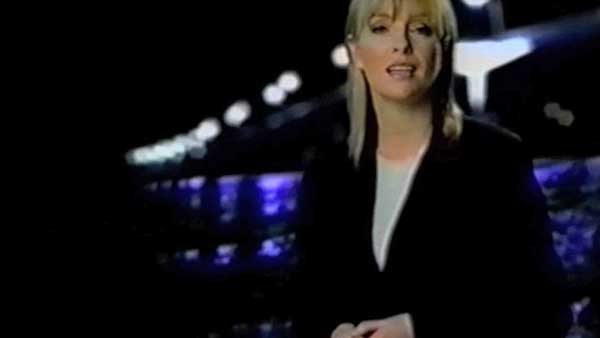 After the success of his numerical profiling in the Scarlet Letter, Scott ramped up using it even more in this episode that was primarily about 15-year-old Catherine Hedland from Berwick east of Melbourne. In December 1980, Catherine left her boyfriend’s house to catch a bus late one morning, and disappeared.

Where this case became complicated for Scott, is that Catherine Hedland’s energy brought through a number of other spirits connected to other murders.

Standing in bushland in Tynong North where these victims were found (including Catherine), Scott admitted on camera that he found it tough to decipher which spiritual clues were from which victim. But he was still able to give the Sensing Murder Producers specific information about Catherine’s disappearance and who was responsible. 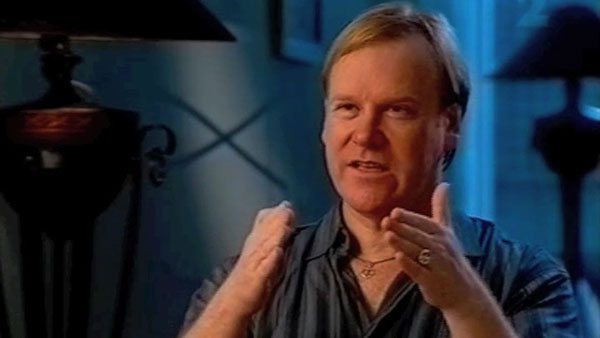 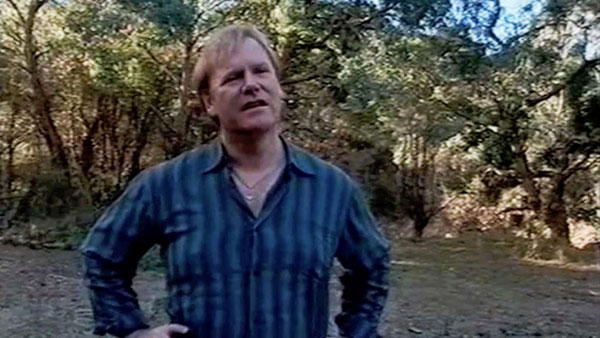 Scott’s 6th Sensing Murder episode was about Elmer Crawford who murdered his wife and three children in 1970, and then put their bodies in the family car and pushed them off a cliff into the ocean. There appeared no motive for the murders, and Elmer Crawford vanished soon after never to be seen again. Where was he?

Scott led the film crew to the street and house where Elmer Crawford and his family once lived in the Melbourne suburb of Glenroy. Filming outside the house upset the then current owner, who came outside and chased Scott and the film crew down the street so they’d go away.

This glitch in proceedings aside, Scott still came up with specific information about the case, but as per the “Cruel Intent” episode, Scott’s information didn’t match what the Producers, Private Investigator and other Psychic felt were the strongest leads, and so Scott’s part was cut from the episode. 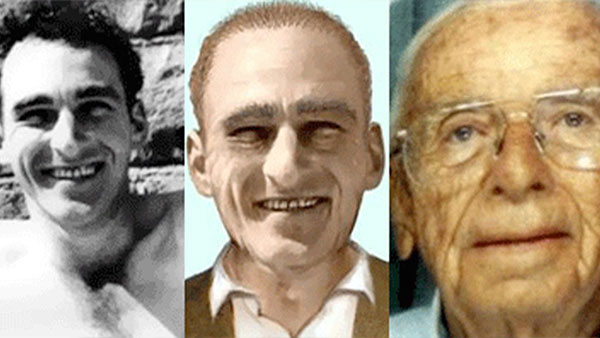 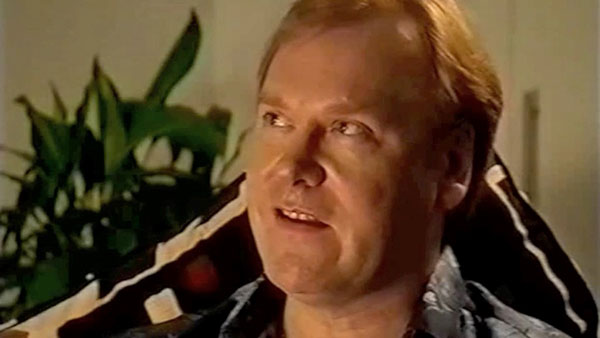 In what is probably Scott’s most talked about and best-remembered episode, he put his Psychic Detective skills towards the New Zealand case of 25-year-old Luana Williams who disappeared without a trace in 1986.

Scott told the film crew specific names and places, and then led them to the actual street where Luana used to work. At the time of filming, the crew didn’t know where Luana had once worked, and thought that Scott was leading them on what they described as “a merry dance around Tauranga.” Imagine their surprise when they later discovered that Scott had been right all along.

Later at nearby MacLaren Falls, Scott was tuning into Luana Williams when another spirit jumped in and completely took over in what was a hugely emotional moment. It was the spirit of 25-year-old Natasha Hayden who had been murdered at MacLaren Falls only months earlier. Again, the film crew didn’t know this and weren’t sure of what was going on.

Natasha Hayden’s father contacted Scott soon after the episode aired, and they remain friends to this day. Scott’s most recent book “Sensing Natasha” is all about the before, during and after of this episode. 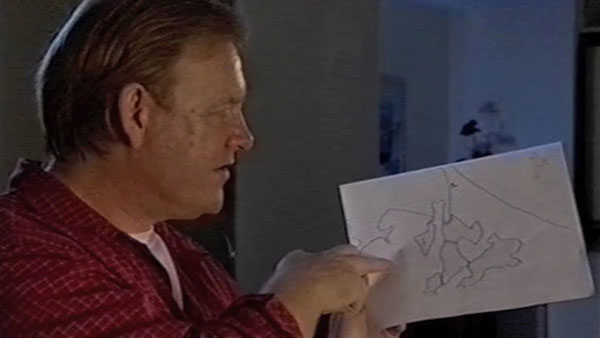 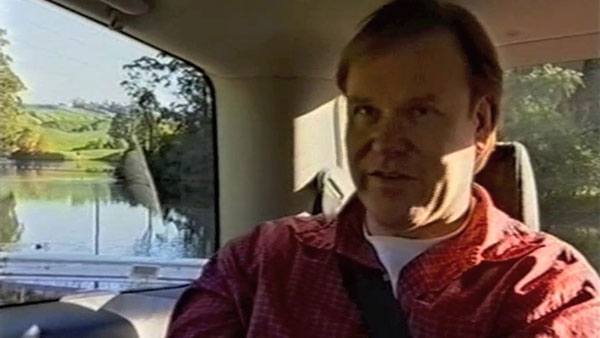 The disappearance of 2-year-old Amber-Lee Cruickshank in 1992 is one of New Zealand’s most baffling and best-known cold cases. She was last seen at Kingston, a small town at the southern tip of Lake Wakatipu.

Scott gave specific names, descriptions, and a scenario surrounding the circumstances regarding Amber-Lee’s disappearance including who was ultimately responsible. 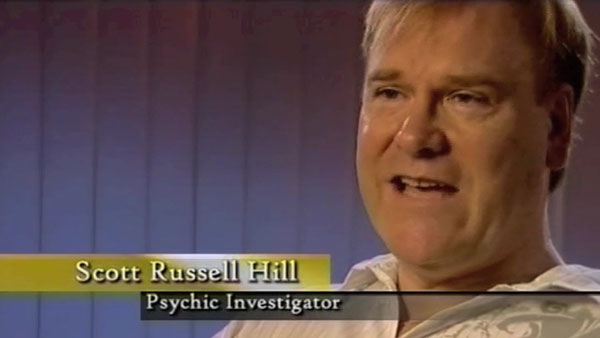 In June 2004, Scientist Jim Donnelly vanished from his work at the Glenbrook Steel Mill south of Auckland. His personal belongings were found in a vat of acid at the factory. 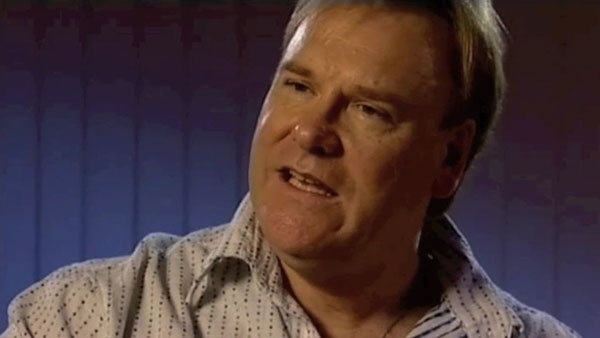 This website is the only official on-line source of information regarding Scott Russell Hill, his schedule, tour dates or other appearances. Scott and his office make absolutely no representations or endorsements of any other websites containing information about him, his seminars, workshops, readings or books.